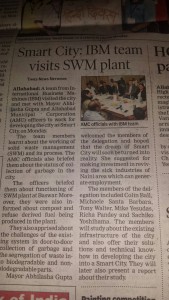 Yes, that’s this morning’s announcement in the Times of India, from our kick off. The meeting itself was a perfect demonstration of the typical business environment and hierarchy that we try to navigate through. Scheduled for 1 pm, started at 1.45 pm because the municipal commissioner who is our primary client was with his staff. The building itself was large and surrounded by security men and other randomly wondering men (which is the case everywhere). The commissioner was surrounded by his staff, all older gentlemen, who were sitting around his own desk handing him papers for signatures and stamps. We went to the waiting room which had one large chair, desk and a few couches – felt a bit like a courtroom. Waited with tea, cookies, tap water that we tend to politely refuse and waited – no AC, team in suits, 38C outside. After about 45 mins we walked to the 2nd floor through the roof to a larger meeting room with more people and where we were positioned as the audience and commissioner was behind the large desk alone – until the mayor walked in with her security guard. Everyone stood up, bowed and was asked to be seated. The mayor is a young woman and was the only woman in the room – except for our team.

After the introductions, the conversations turned into a mix of Hindi-English. Ooolala, it is hard enough to sort out through all the accents (including Kiwi, Aussie and British) but if Hindi is thrown in, it makes for a hell of a meeting. The dynamics of power was also fascinating – the mayor is the political or elected leader, the rest are appointed execution positions so high skill of reading between the lines is required. Scope for our project increasing or changing based on who is speaking. A bunch of photographers taking pictures, attendance is taken, lots of unknown people entering and leaving, phones being answered in the middle of discussions, nod decks, lots of jokes in Hindi – so “welcome to doing business in India”. Now, I have had my share of meetings but this one definitely stands out….

But we are off, the fun is just beginning…

This is an ode to my colleague Richa who was raised in Allahabad and came back as a “daughter of Allahabad” according to local media.