Yes, that was our May destination, long pre-planned though. We were going for Erica’s wedding, our oldest niece and decided to add a few days to it in New York City. The kids have never been and always wanted to go. They have this picture of NY from Friends which they just binged watched + Home alone, so had very clear idea what they want to see (like where Rachel and Monica go for coffee, Kevin meets Trump, Alex and Marty get out of the NY zoo and go to Madagascar, etc.) – agh, the joys of TV. Brian and I miss NY a lot so why not? Well, it is different being a tourist and a one with 3 kids in a tow, let me tell you.

We were in Tryp hotel on the 35th street, great room for family, highly recommend – almost 2 rooms, bunk bed, plenty of space for everyone, fancy bathroom that kids fell in love with. For NYC? A mansion. It also worked out really well for our walks, Day 1 walking uptown, Day 2 downtown.

Walk up, through Times Square to Central Park. Eat in Brooklyn Diner where I myself have never eaten – a bit of a tourist thing but that’s what we were! Old atmosphere so charming for the kids. Their impression – it is smelly here, they need more trash people, lots of people, very very loud – well, accurate. Somehow we reached the age with Lucas when stores are more popular than anything else so we were on a hunt for Supreme shirt. If you dont know what it is, you were also asleep under a rock when middle schoolers were rioting. It is overpriced, youth brand that prints it on Old Navy like clothes and charges crazy money.  Stay tuned for update on it! We took subway, we walked on the Fifth Avenue and browsed through the Central Park. Perfect day that ended in a small Indian hole in a wall that had awesome butter chicken, India kitchen. 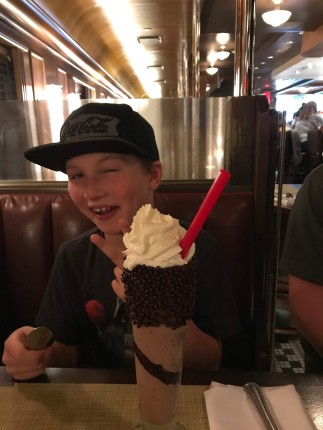 Meatpacking district, made it to John’s pizza, the landmark on Bleecker street, saw Murray’s cheese shop, stopped at the playground where Lucas used to swing when he was 1. Freedom towers which was very emotional. A bit surprised about the funky looking architectural mall right next to it. China town, Little Italy, Lafayette and Washington Square. Mia, Max and I took a cab to hotel – kids were so excited to get one. Lucas and B kept going down to Battery park and Brooklyn bridge. Larb Ubol for dinner – top Thai food.  Oh yes, and that Supreme thing – made it there and thought there was some celebrity in there or something b/c the line to get in was around 2 corners of NYC block. WTH? Who waits to buy a $50 shirt for 2 hours – not us ! Out of there very quickly and laughing out loud.  Fashion these days, hats down to someone who can make people wait to pay this type of money for shirts. Ridiculous, if you ask me. 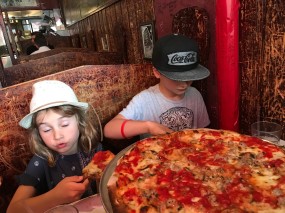 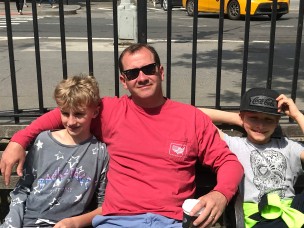 At the same playground at 12

Off to Hamptons – on a bus! Yes, on a bus, we took Uber to East side and got on a large bus for 2 hours to Sag Harbor. Never seen that much of Long Island, or any actually. Surprisingly comfortable on Hampton Jitney – water, wifi, all you need. It is planes, taxis and automobiles for us!